Krishna is the eighth avatar of Vishnu, appearing on earth to restore peace to a disturbed world. In this mortal avatar, he started out as a compassionate yet mischievous cowherd, eventually overthrowing the evil Kamsa and reinstating Kamsa’s father and his grandfather Ugrasena on the throne of Mathura. Krishna then went on to befriend his cousins, the Pandavas, and played a key role in the Mahabharata, and disclosing the secrets of the Bhagavad Gita to Arjuna on the battlefield.

Krishna started serving his life’s purpose of restoring the balance between good and evil, right from the day he was born. During his time here, there were many demonic enemies he had to take on. Here’s a list of five such powerful beings who faced their end at the hands of the flute-playing divinity. 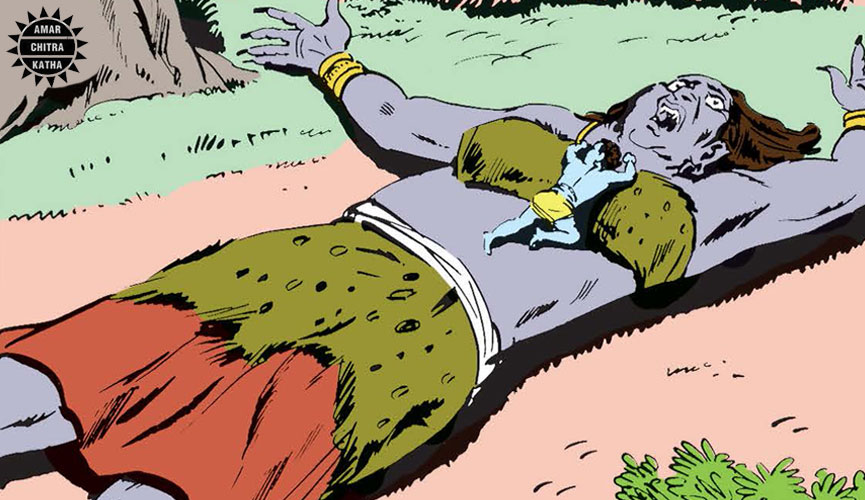 Putana was a powerful witch who took great joy in killing children. One day, Putana entered Krishna's house in Gokula as a beautiful damsel. She was so pretty that no one questioned her when she entered the house. Upon entering, she found baby Krishna lying on a small bed. She picked Krishna up, placed him on her lap and began to suckle him. She hoped Krishna would die sucking on the poison she has applied on her breasts. However, Krishna bit her so hard that he sucked the life out of her. Putana fell on the ground and started shrieking in pain, soon reverting to her original avatar. The vibrations created from Putana’s screaming made people think that thunderbolts were falling from Putana's fallen body. The gopis saw Krishna and immediately handed him over to his mother, Yashoda. The news of Krishna’s trick soon spread like wildfire. 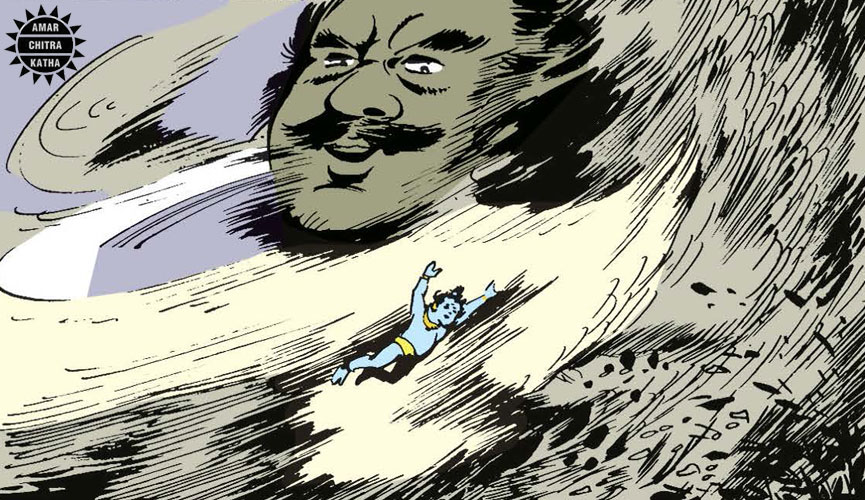 On his first birthday, baby Krishna’s kick destroyed Shakatasura who had disguised himself as a cart. A few days later, Trinavarta, a servant of Kamsa, appeared in the form of a hurricane. He picked up Krishna, placed him on his shoulders and raised a storm all over Gokul. The storm made people shut their eyes, thus, no one could see what was happening. Yashoda couldn't see her baby Krishna and started crying bitterly. In the meantime, Trinavarta had flown very high with Krishna perched on his back. Suddenly, to the demon’s surprise, Krishna started becoming very heavy, so much that Trinavarta could no longer bear the weight. He felt like he was carrying a mountain on his shoulders. Then, the infant Krishna caught Trinavarta by the neck and killed him, his eyes popping out as he fell to his death. 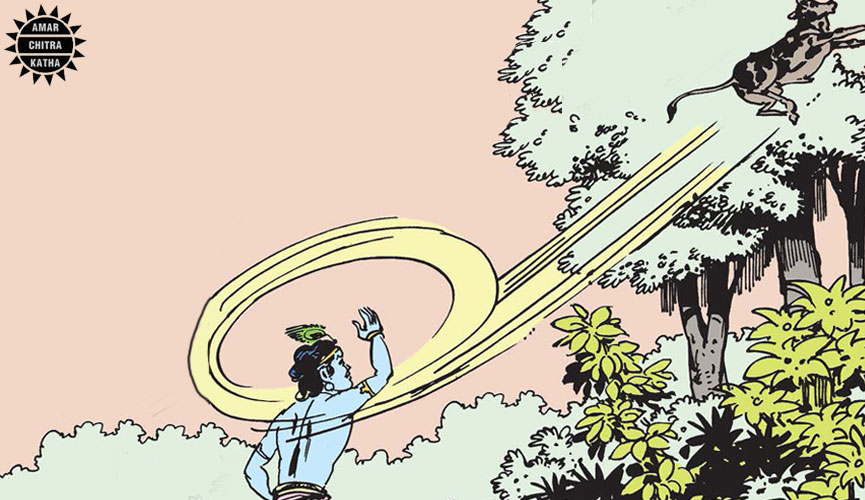 One day, Krishna, Balarama, and a few of their friends were herding their cattle on the banks of the Yamuna. A demon named Vatsasura took the form of a calf and mingled with the other calves. Upon noticing the additional calf, Krishna slowly approached it, caught Vatsasura by his hind legs and spun him round and round. The sheer speed at which Krishna spun the calf demon ended up killing Vatsasura. Krishna then threw the dead calf on top of a wood-apple tree. Eventually, the demon took his original form, crushing a number of trees under his weight. 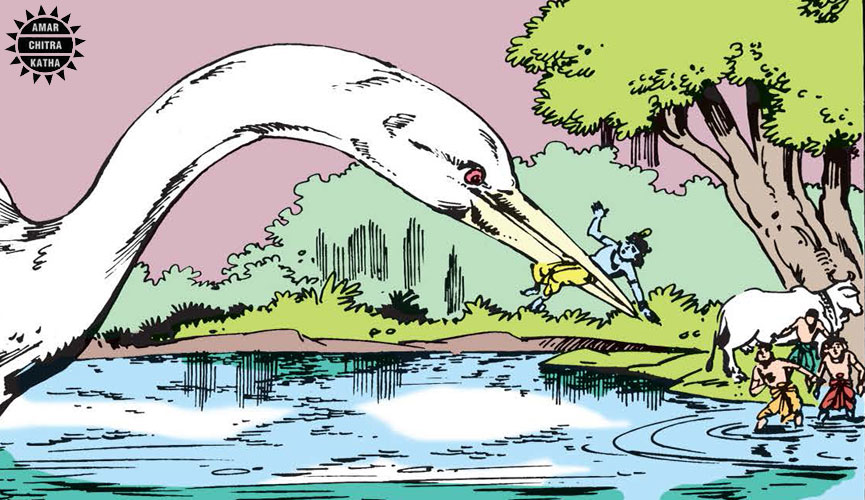 As Krishna and his friends grew older, they were allowed to take the older cattle to the forest to graze. On one such day, while they were by a lake, they saw an animal which looked like a huge crane who had a very sharp beak. This animal was none other than Bakasura, Kamsa’s friend in disguise. Bakasura immediately attacked Krishna with his sharp beak and swallowed him. On seeing this, his friends became breathless and fainted. However, almost immediately after swallowing Krishna, Bakasura felt a burning sensation in his throat and he threw up. As soon as Krishna came out, Bakasura tried to kill Krishna by pinching his beak together, but Krishna forced Bakasura’s beak open, breaking it at the jaw without breaking a sweat. 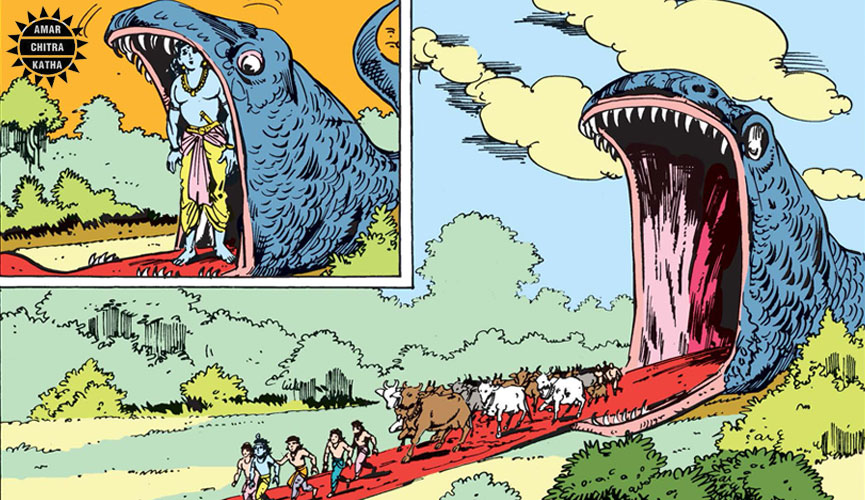 Aghasura, brother of Bakasura and Putana, was so powerful that even the devas feared him. In a bid to avenge his dead siblings, he transformed himself into a humongous serpent determined to kill Krishna and his clan.

He stretched himself wide and sat on the path on which Krishna and his friends played on, and opened his mouth wide, resembling a cave in a mountain, his eyes gleaming like fire. Unaware of the dangers that lay ahead and trusting Krishna’s powers, the Yadava clan and the cattle entered Aghasura’s mouth. He kept his mouth open until Krishna entered, then he swallowed them all.

That’s when Krishna started playing his tricks. Once inside, Krishna began to grow in size, choking the demon’s throat. Suffocated, Aghasura’s eyes started to bulge and soon his enormous body became lifeless. Eventually, Krishna, the cowherds, and the cattle stepped out of the dead demon’s mouth, unscratched.