In Hindu mythology, the demi-god Kubera is known as the god of wealth. Once the ruler of Lanka, he was overthrown by Ravana, his half-brother. He eventually settled in the city of Alaka in the Himalayas. In the scriptures, Alaka or Alakapuri is described as a splendid city blessed with abundance, much like the wealthy god’s personality.

Kubera is often depicted holding a bag of gold, symbolizing the enormous wealth he owns. Interestingly, he also owns nine priceless treasures. According to Amarakosha, a thesaurus written in Sanskrit by the ancient Indian scholar Amarasimha, Nidhi or Nidhana is a set of nine treasures possessed by Kubera. While not much is known about the Nidhi, it is believed that each of these has a guardian spirit associated with it. Let’s look at the Nidhi in brief. 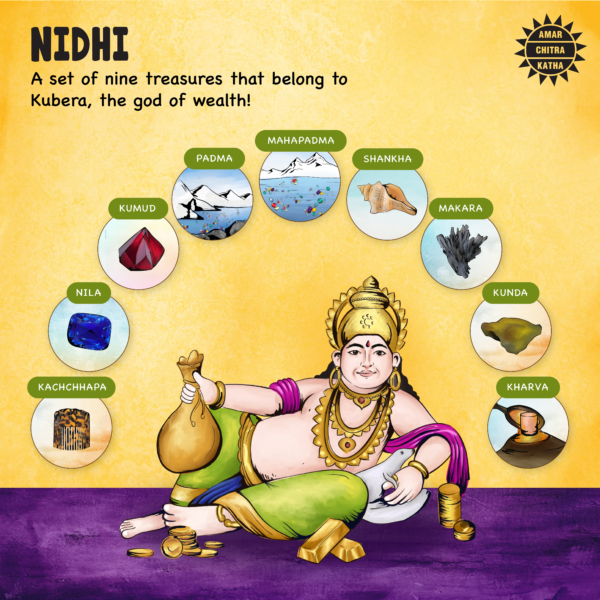 The Padma translates to the lotus flower. However, this treasure is interpreted as a lake in the Himalayas containing precious minerals and gemstones.

Just like the name signifies, Mahapadma is the great lotus flower, which symbolizes a lake double the size of Padma. Thus, it has double the number of minerals and gemstones than the Padma.

The Shankha or conch is considered to be a sacred object, according to the scriptures. It holds significance in a lot of Puranic texts, including the Mahabharata. The mineral composition of a shankha, calcium, iron and magnesium, makes it even more precious.

While the literal translation of Makara is a crocodile, Amarakosha says it is also a synonym of Padmini, which means black antimony. The powdered form of antimony is a source of kohl.

The tortoise shell is considered auspicious. Its mineral composition makes it extremely valuable. Various accessories and artefacts have been designed from turtle shells in old times. However, the illegal trade of tortoise shells has been banned under the Convention on International Trade in Endangered Species since 1973.

A tantalizing bright scarlet coloured mineral, cinnabar is one of the other treasures of Kubera. It is the brick-red form of mercury sulfide. This mineral is the source of vermillion which is used in several Indian rituals too.

Kunda means the jasmine flower. However, this treasure is interpreted as arsenic, since the jasmine plant absorbs arsenic from the soil.

The Kharva symbolizes cups and vessels baked in fire.

The gemstone sapphire is Nila. It is made up of the mineral corundum, a crystalline form of aluminium oxide. The blue gemstone is one of the most expensive jewels, even in the real world.