Ancient Indian scholars extensively studied the stars and other celestial bodies in the never-ending spatial sky. This thorough study of astronomy and astrology eventually created the Jyotish Shastra which explained how the Navagraha, literally meaning the nine planets, influence the lives of the earth dwellers. Though not all members of the Navagraha are planets; Surya, the sun is a star; Chandra, the moon is the natural satellite of Earth; Rahu and Ketu are lunar nodes that are responsible for eclipses of the sun and moon. 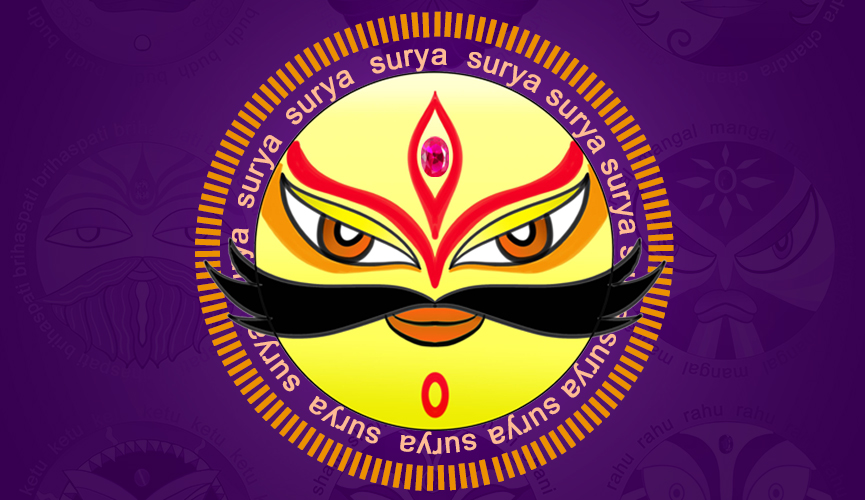 Surya, the God of the Sun is considered to be the leader amongst the Navagraha. Rightly so, as the other members of the celestial group revolve around Surya. The son of sage Kashyapa and Aditi is a prominent figure in Hinduism and is often considered on the same level as Indra in the hierarchy of the Devas. The God is often represented with four arms, out of which two hold lotuses, one holds a staff and another one has a chakra. The sun god is depicted seated on a chariot pulled by 7 horses, which is a symbolic way of representing the splitting of white sunlight into seven colours of the VIBGYOR spectrum. The day designated to Surya is Sunday, called Ravivaar in Hindi which literally translates to ‘Sun’s day’. The colour associated with the sun god is orange and gold, and to evoke the blessings of Surya one is asked to pray to the god by offering water to the deity by pouring it from a vessel. Surya as a Navagraha embodies qualities such as leadership, ego, strength, authority and vitality of a person. 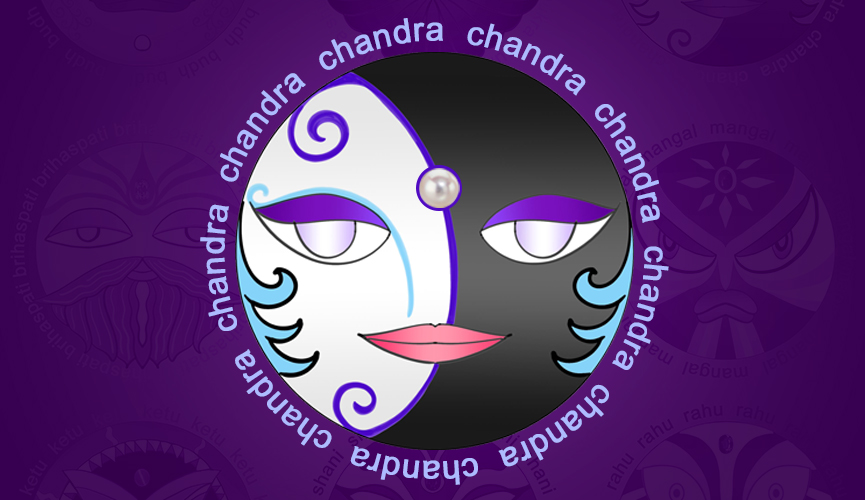 Chandra is the moon god, and since Hinduism follows a Lunar Calendar, Chandra has always remained an important deity in the religion. The son of sage Atri and Anusuya was married to twenty-seven daughters of Prajapati Daksha who are all named after constellations. Chandra was biased towards Rohini and did not spend equal time with his other consorts and so the displeased women complained about their husband’s unfair treatment to their father, Daksha. The furious father, cursed his son-in-law, that he would lose his powers and his body would slowly wither away. The dying deity prayed to Lord Shiva who blessed the moon god with a boon which in a way balanced the effects of the curse. This established the waxing and waning of the moon, according to which, the moon waxes for 15 days, where it decreases in size and completely vanishes on the new moon day, and it wanes for the next 15 days, where it increases in size and regains its full powers on the full moon day. The lunar deity is never depicted with a full body, symbolising his waxing and waning and his chariot is said to be pulled by antelopes. Monday is the day associated with Chandra, and one must offer white or silver coloured articles and wear white to please the celestial god. The moon is said to embody thinking, stability and fertility. 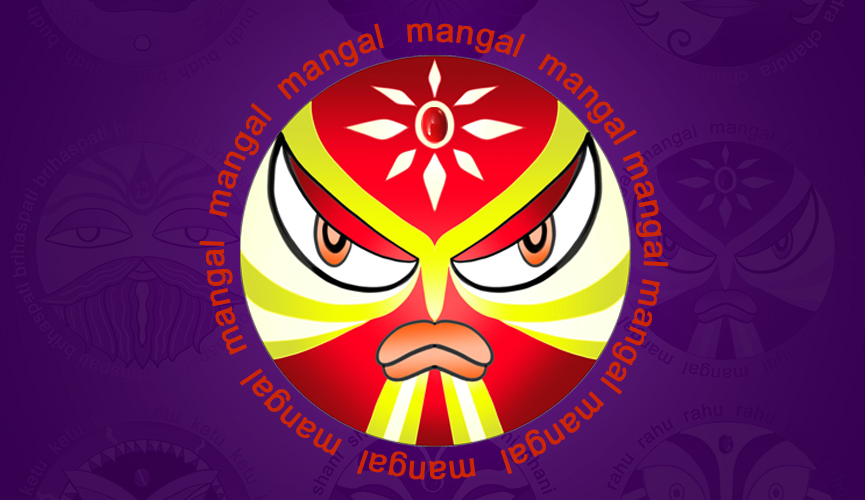 Mangal, is the astrological ruler of the red planet, Mars. The theme of colour red is reflected in Mangal’s iconography, as he is often depicted to have red skin. Just like Kartikeya, the Hindu god of war, Mangal is also affiliated with war, battlefield and weaponry which is reflected in his visual depictions as he is shown armed with multiple weapons like a sword, a mace and a spear. The red-hued deity was said to be born when Lord Vishnu, in his Varaha avatar rescued Goddess Bhoomi, the personification of Earth, after asura Hiranyaksha had submerged the planet in the cosmic ocean. But in some stories the deity’s father is Shiva. One of the stories in Shiva Purana describes Mangal to be born from the sacred surface of the Earth, which had absorbed divine drops of sweat of Shiva. Mangal’s vahana is a ram and the deity is said to have an astrological influence on skills of hands, handling of equipment, anger and strength. Articles like wheat, red cloth, red flowers, copper and sandalwood are offered to the deity during prayers. Tuesday or Mangalvaar is the day associated with the celestial deity. 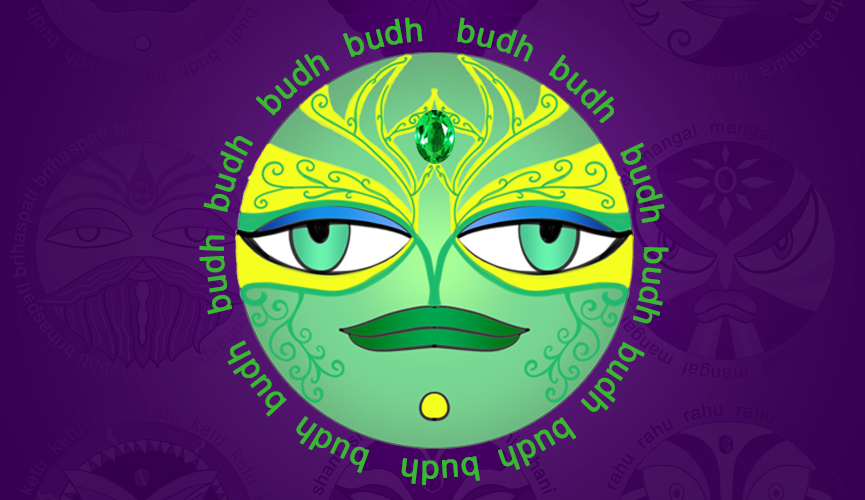 Budh, is the Navagraha deity that rules the planet which is closest to the sun in the solar system, Mercury. The Navgraha member’s mother, Tara was married to Brihaspati, but the biological father of Budh is Chandra. Learning about the parentage of Budh, a humiliated and angry Brihaspati cursed the unborn child to be neither a male nor female. And hence Budh was born as a gender-neutral person. Budh’s iconography often depicts the deity with green skin and holding a mace, a shield and a sword in three of his four arms. The ambiguous gender identity of the green-skinned deity, is also in a way reflected in their choice of vahana. Budh rides a Yaali, which is a chimera like beast composed out of the parts of an elephant, lion, horse and sometimes a bird. The theme of fluidity and ambiguity is also maintained with Budh’s consort, Ila, a gender-fluid goddess, who transitioned into a man from a woman and vice-a-versa after every month. Together, they had a son called Pururavas, who came to be known as the first king of Chandravanshis, the lunar dynasty of kings. Budh, as a Navagraha, influences intellect, communication, humour and reasoning, and Wednesday, or Budhwar is the day allocated to the deity. One is advised to offer articles like, green cloth and moong lentils to please the astrological deity. 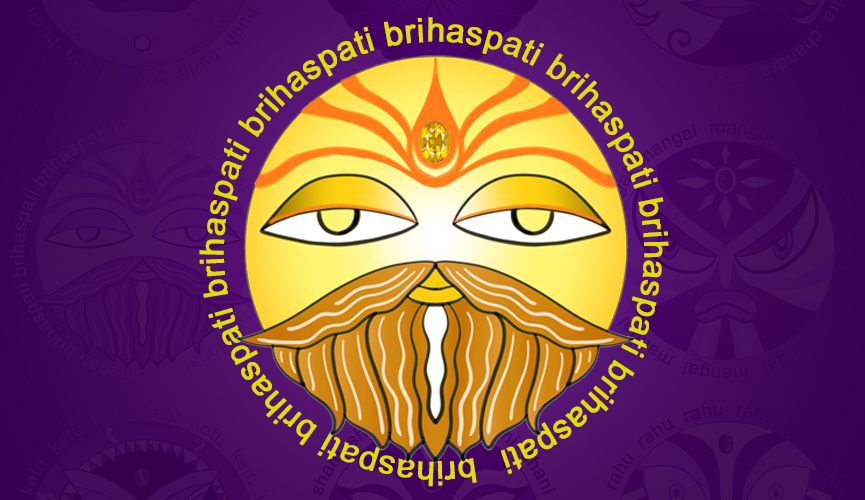 The sage Brihaspati is the Navagraha deity representing the giant planet Jupiter. He is a wise god who is considered to be the lord of sacred speech. Due to his immense wisdom, he was appointed as the mentor of all the devas and thus he is also known as Guru Brihaspati. Hence Thursday is called both Brihaspativaar and Guruvaar which is the day associated with the deity. Indra, the king of devas, had once disrespected Guru Brihaspati, and the teacher abandoned his title as the mentor of the devas, which was then temporarily taken by the sage Vishwaroopa, but eventually, Indra ended up beheading his new guru in a fit of rage. The son of sage Angiras is often depicted with a glorious golden complexion with four arms, carrying a lotus, kamandalu, and rosary. The celestial god is said to embody qualities like spirituality, wisdom, dignity, morality, and luck. The golden complexioned god is offered articles that are yellow in colour, like gram pulse or flour, yellow flowers and turmeric. 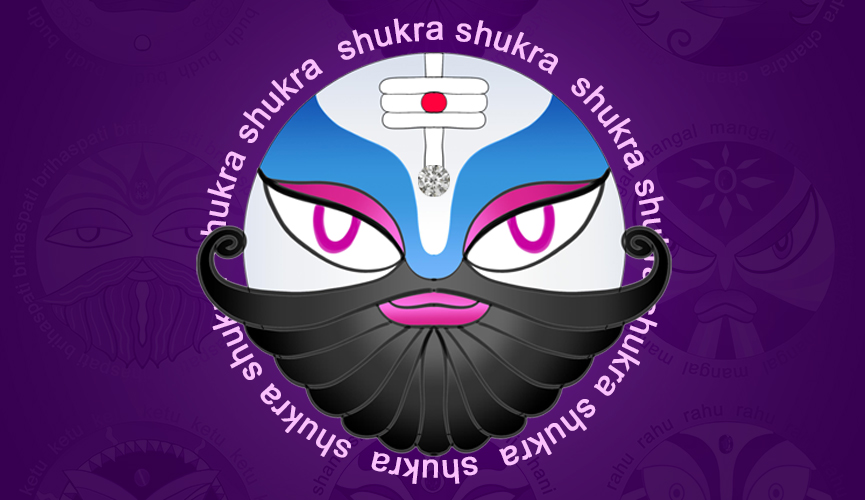 Shukra or Shukracharya, is the deity of the planet Venus. The learned Navagraha member, plays the similar role of a mentor, like his fellow Navagraha, Brihaspati, the teacher of Devas, but unlike him, Shukracharya serves as a mentor to the asuras, the arch-nemesis of the devas. The celestial deity was an ardent devotee of Lord Shiva, and performed harsh penance to please the god of destruction. Shiva appeared before Shukracharya and rewarded him with the Mrita Sanjeevani Vidya mantra which allowed Shukracharya to revive anyone from the dead. This boon gave an upper hand to the asuras, as Brihaspati, the teacher of devas lacked the knowledge of Mrita Sanjeevani Vidya, and thus the asuras were able to defeat devas. Mahabali, an asura, and the grandchild of Prahalad was able to take over the three worlds under the guidance of his teacher, Shukra. The scholarly sage is depicted with four arms, carrying a staff, rosary, and a golden pot. Friday or Shukravaar is the planetary day of the deity, and the colour white is associated with him. Articles like rice, ghee, camphor, curd, sugar are offered to the deity.  Shukra embodies qualities like, material desires, relationships, creativity, aesthetics and healing. 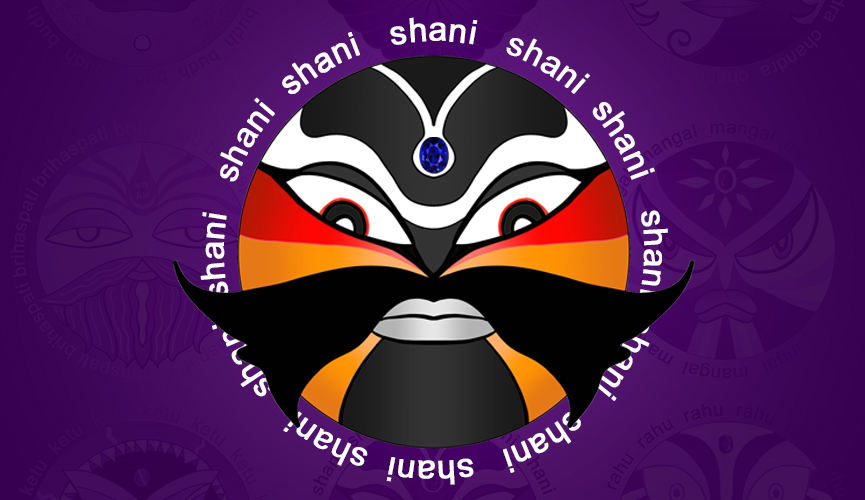 Shani, is the Hindu god of justice and the ruler of the planet Saturn. The powerful god keeps a record of karmic deeds of humans and passes his judgements upon them during their lifetime, unlike his brother, Yama, who makes his judgement only after the human has passed away. Due to his mother Chhaya’s intense penance and his father, Surya’s harsh sunlight, Shani was born with a charcoal black complexion. Upon seeing the newborn, Surya, who was bright and radiant, was bewildered as the pitch black child had no resemblance to him. The newborn Shani sensed his father’s doubt and cast an evil eye on his father, which caused Surya to go under eclipse. This evil eye is known as Shani Drishti, which brings bad luck to anyone who falls under his direct vision. Due to this, the devotees must not offer their prayers by standing directly in front of Shani’s idol. His idols are often depicted with four arms in which he carries, a mace, a trident, a bow and an arrow. The deity is said to have a crow or a vulture as his mode of aerial transportation. Saturday or Shanivaar is the day associated with the celestial god of judgement. One is advised to offer black iron nails, black lentils and black clothes to Shani. Devotees of Lord Hanuman are also protected from Shani’s evil eye as Shani had given this boon to Hanuman when he released Shani from the captivity of Ravana. 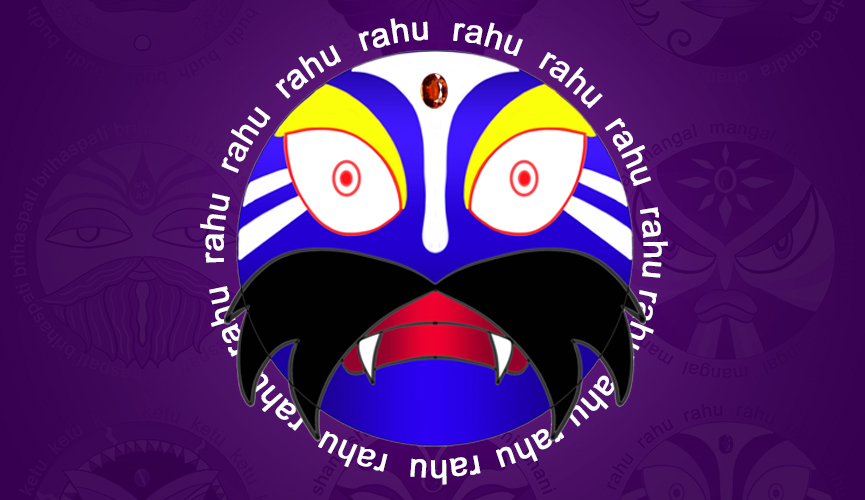 Rahu and Ketu unlike other Navagraha members do not rule upon a physical planet. They are chhaya graha, which means shadow planets, and hence are responsible for eclipses of the sun and moon. The two shadow planets were once a single entity. Svarbhanu, an asura, who aspired to become invincible, disguised himself as a deva to consume the nectar of immortality. Surya and Chandra due to their celestial light were able to identify the imposter among them and informed Mohini, the female form of Lord Vishnu. By the time Mohini used her Sudarshan Chakra to behead the asura, Svarbhanu had already consumed the nectar, thus making him immortal. Due to this the decapitated head and the body came to be known as two different entities called Rahu and Ketu, respectively.

Rahu is the decapitated head of the asura, Svarbhanu, and it represents the northern lunar node. Rahu is responsible for the eclipse of the sun, which was once interrupted by a young Hanuman, who wanted to consume the sun, thinking the bright flaming ball was a giant fruit. The Navagraha is depicted without a body, mounted on his vahana, a black lion. Since the deity lacks a body people believe that the influence of this deity causes undue harm. People donate mustard, saffron, sesame, lead and coal to appease Rahu. 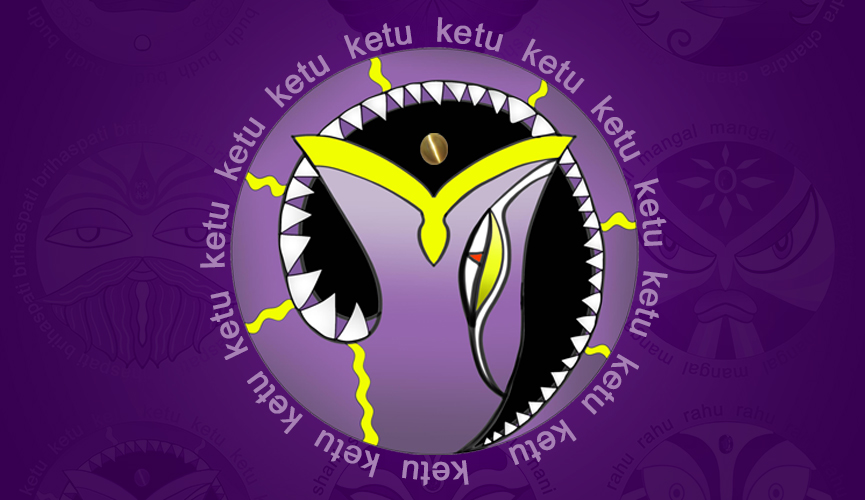 Ketu is the headless body of the asura, Svarbhanu, and it represents the southern lunar node. Ketu is responsible for the eclipse of the moon, where the deity is said to completely swallow the lunar celestial body. The Navagraha is depicted without a head, with fours arms and a serpent’s tail instead of legs, mounted on his vahana, a vulture. His name ‘Ketu’, means a comet, and his serpent tail is a symbolic representation of a comet’s tail. People believe Ketu represents amorality, violence, detachment, confusion, mindlessness, and impulsivity. To avoid the ill effects of the celestial god people donate saffron, sesame, lead and sugar and offer food to a black and white coloured dog.