Ganesha is revered all over the country not only during Ganesh Chaturthi but before every puja or ritual of worship. But did you know that, according to the Mudgala Purana, Ganesha took eight avatars or incarnations to save the world from demons who personified a dosha or shortcoming in human nature? These doshas are also present in gods and it is through them that the demons were born. Ganesha has an elephant head and trunk in every avatar but he trades his mouse-y vahana Mooshik for other animals in some of his incarnations. Let's get to know the stories behind each avatar. 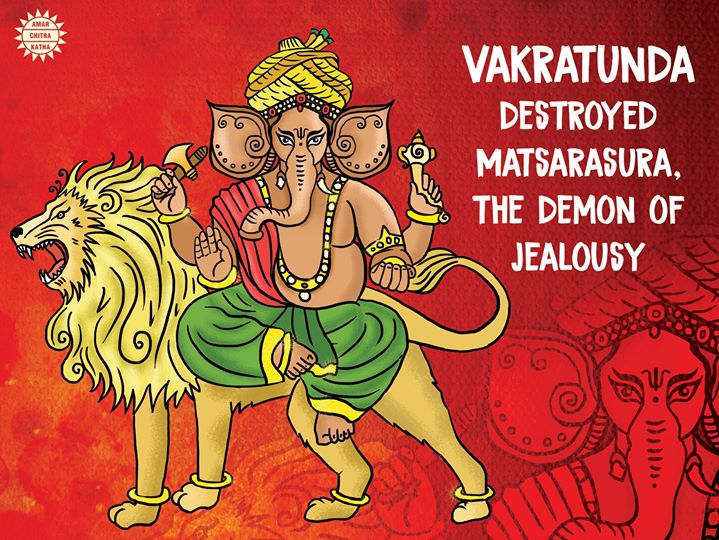 Ganesha's first incarnation was as Vakratunda meaning curved trunk. According to the legend, Lord Indra's pramaada (heedlessness) gave birth to the demon Matsarasura. Matsara means jealousy and selfishness. After severe penance, Matsarasura received the boon of fearlessness from Shiva. He along with his two sons Sundarpriya and Vishaypriya, conquered the three worlds and created havoc everywhere. All the gods approached Shiva for help but bound by his own boon, Shiva could not do much. Finally, Lord Dattatreya came to the rescue. He gave all the gods the secret of the monosyllabic mantra, Gam, and asked them to call upon Lord Vakratunda. Seated on his vehicle, the lion, Vakratunda arrived and killed both sons of Matsara. Looking at the mighty god, the demon surrendered and asked for forgiveness. The Lord forgave him and restored the three worlds.

Ganesha, in his Vakratunda avatar, shows the world that however powerful or rich you are, wisdom lies in knowing and understanding your limits. 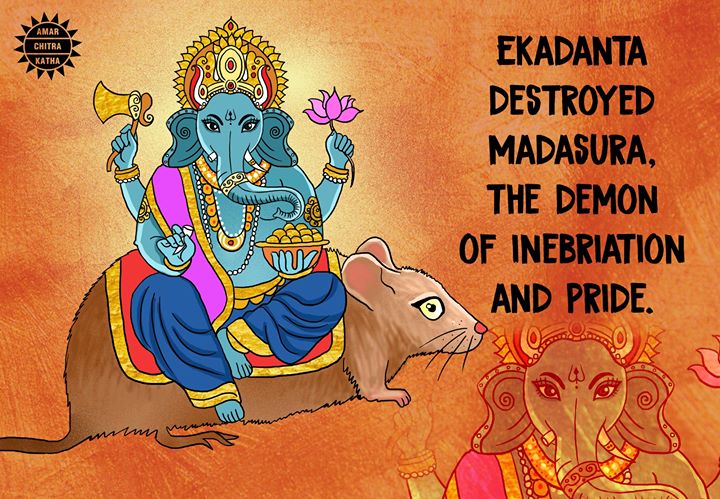 The asura, Chyavana, had a son, Mada, who was fond of madira or alcohol. Mada was schooled by his uncle Shukracharya, Chyavana's brother as well as the guru of the asuras. Madasura told Shukracharya that he wanted to rule the world. Pleased by his nephew’s ambition, Shukracharya gave him the Shakti Mantra ‘Hrim’. Madasura performed penance for a thousand years invoking the goddess and received special powers from her. Armed with these new powers, and high on alcohol and arrogance, Madasura started conquering the three worlds. The gods turned to the sage, Sanat Kumara, for help. Sanat Kumara asked them to invoke Ekadanta. Seated on Mooshika, Ekadanta came to wage war against the demon. However, Madasura lost his courage in front of the mighty god and surrendered, earning Ekadanta’s forgiveness. Ganesha in Ekadanta avatar shows us that intoxication can fill one with pride beyond control. 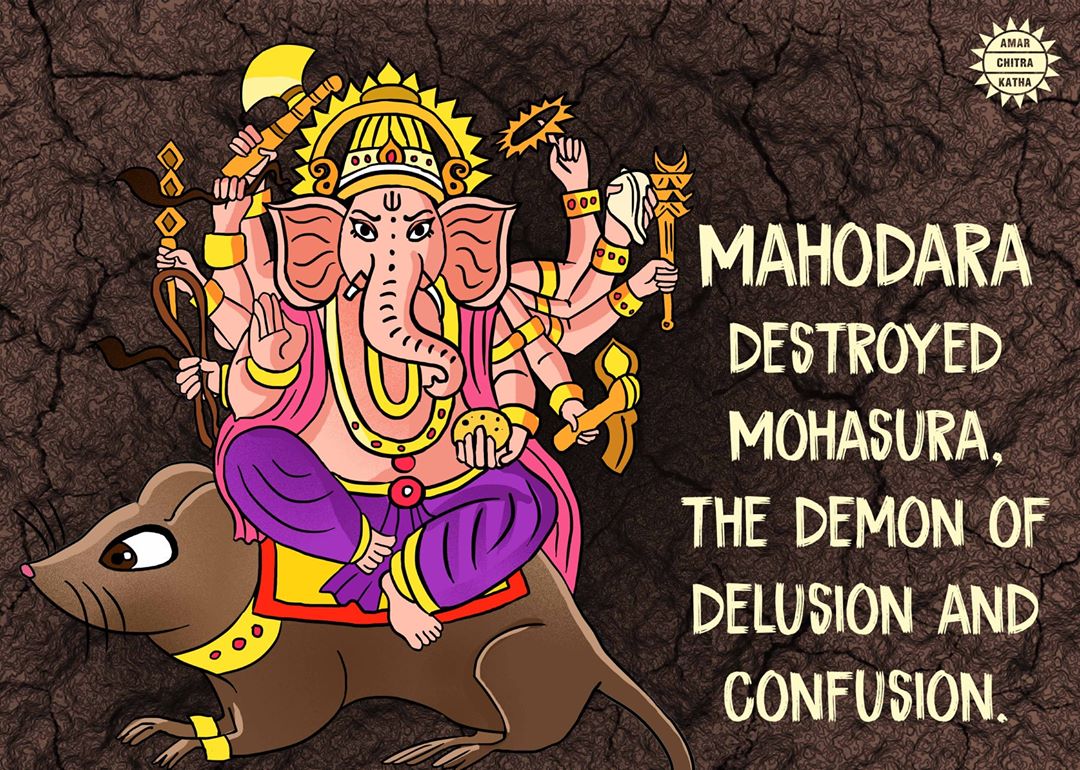 The story of Ganesha’s third avatar, Mahodara, has two versions. The first version talks of the main antagonist, Mohasura, who came to be known as Daitya Raj or the king of the asuras, because of his devotion to Surya, the sun god. In the second version, once when Shiva was in deep meditation and the gods needed him, they asked Parvati to help break his trance. Parvati took an alluring form and distracted Shiva. When Shiva came out of his meditative state, Parvati discarded her alluring form. This discarded energy took the form of Mohasura, the embodiment of delusion, who then went on a rampage against all three worlds.

Both stories conclude similarly. The terrified gods went to Surya for help. Surya advised them to pray to Mahodara. Pleased by the prayers, Mahodara arrives on Mooshika to wage war against Mohasura. At this point, Vishnu appears, advising Mohasura to surrender, as all would be forgiven. Mohasura pays heed to Lord Vishnu's advice and surrenders himself to Mahodara, becoming his devotee forever. 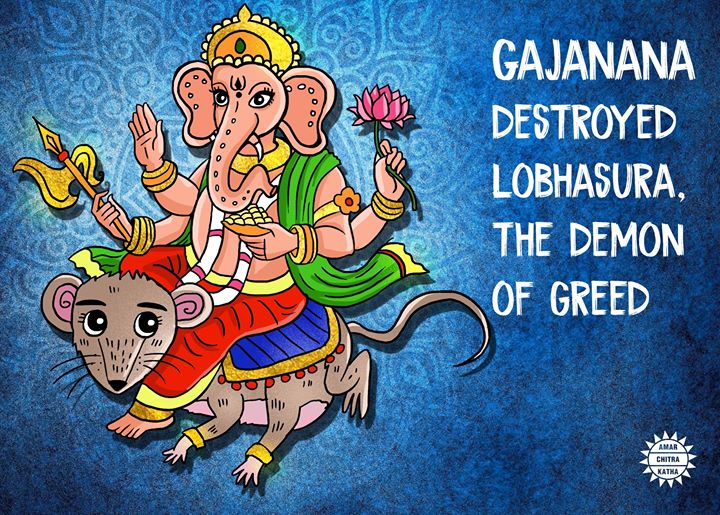 Kubera, the treasurer of the heavens, once visited Kailasa, the abode of Lord Shiva. He looked at goddess Parvati with lustful eyes, which made the goddess angry. Kubera started shivering with fear. This fearful energy got manifested into Lobha. Lobhasura went on to study under Shukracharya, using the mantra 'Om Namah Shivaya' to perform penance, and eventually gain enough power to conquer the three realms. Troubled, the gods approached sage Raibhya who told them to pray to Lord Gajanana. The sheer presence of Gajanana was enough to fill Lobhasura with guilt, who begs for forgiveness. This avatar shows the world that lust is self-indulgent and self-centred and unknowingly leads to the destruction of the soul. 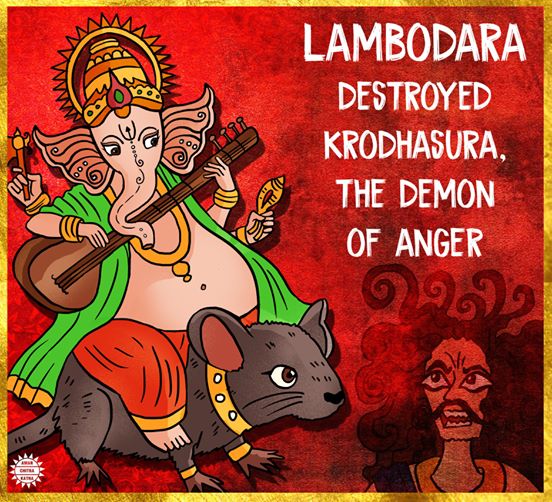 During the episode of the celestial churning of the ocean, Vishnu took the form of the beautiful and charming Mohini to trick the asuras. However, he did not see Shiva becoming enchanted by this avatar of his. When he realises this, Vishnu immediately reverts to his original form. This made Shiva sad and angry and this anger manifested into a terrible demon named Krodhasura. Krodhasura became Shukracharya's student, venerating the Sun god and performed penance, becoming powerful enough to - you guessed it - wreak havoc on the three worlds. To stop Krodhasura’s rampage, Ganesha took the form of Lambodara and appeared with a potbelly large enough to accommodate the anger of the demon Krodhasura! Lambodara manages to subdue Krodhasura and peace is restored. 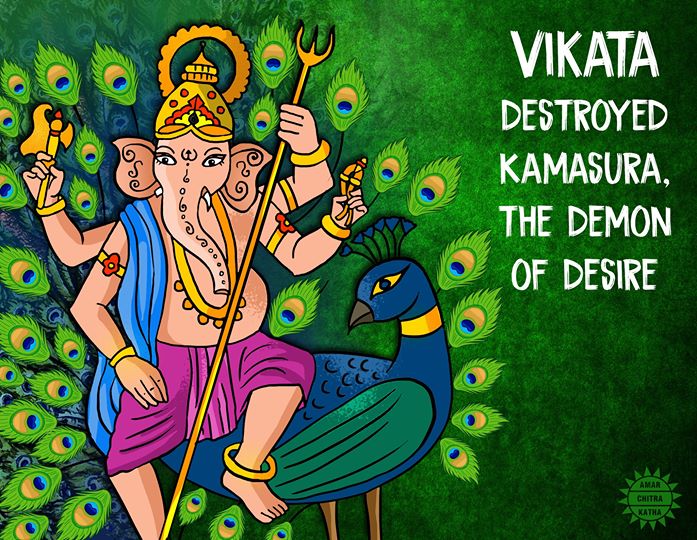 Kamasura was born of Vishnu and Vrinda, the wife of the demon Jalandhara. He embodied trickery, lust and the consequences of lust. Kamasura took refuge with Shukracharya, the guru of the asuras and was told to observe severe penance and meditate on Shiva. Kamasura then received a boon by which he conquered the three worlds and created trouble for all the gods. On the sage Mudgala’s advice, the gods begin to chant ‘Om’ in a place called Mayuresa Kshetra, thus summoning Ganesha in the avatar of Vikata, atop a peacock. In his Vikata avatar, Ganesha is able to easily defeat Kamasura. This avatar shows the world that desire has no end. Satisfaction and happiness are not the outcomes of any achievement but a state of being that comes from within. 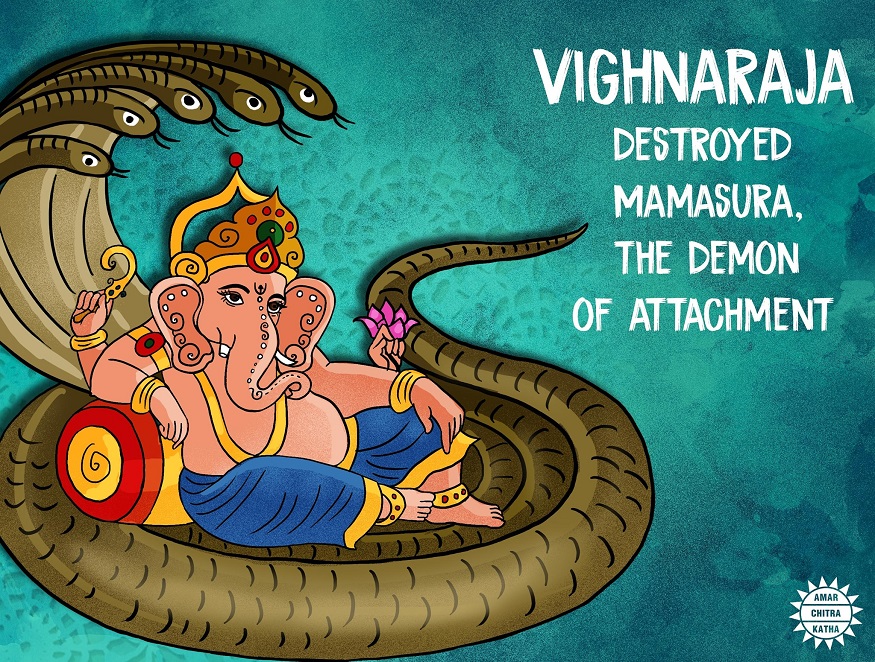 Once, goddess Parvati was relaxing in the company of her friends in a forest when her burst of laughter manifested into a handsome boy. Surprised by her creation and swayed by her ego which resulted in attachment, she named him 'Mama' which in Sanskrit means 'Mine'. She told him to always follow the right path and pray to Lord Ganesha. Mama decides to retire to the forests to meditate on Lord Ganesha but meets the demon Sambara on the way. Sambara lures him into the world of the asuras and slowly, the good-natured Mama becomes the demon Mamasura. He marries Mohini, the daughter of an asura chief, and starts his campaign to rule all three worlds. Defeated and thrown out of Swarklok, the gods turn to Ganesha for help. So he takes on the avatar of Vighnaraja - the remover of obstacles. Riding on the great serpent, Sheshnaag, Vighnaraja tames the demon of attachment and restores peace. Vignhnaraja was a symbol that showed the world that there is no pleasure in worldly attachments. The soul seeks truth and divinity, everything else is an illusion.

This was the last avatar of Ganesha’s. Once Brahma gave the right to rule over the 'world of action' to his grandson, the sun god Surya. Surya grew proud and thought to himself that since the entire world is governed by karma or action, he had become the lord of the whole world.

As this thought passed his mind, he happened to sneeze and from his sneeze manifested a demon. The demon went to Shukracharya who gave him the name Ahamkarasura, as he was born from the sun's ego. Shukracharya also asked him to do penance and meditate on Ganesha. Terrified by Ahamkaura’s growing power, the gods look to Ganesha for help. Ganesha obliges, taking on the form of Dhumravarna, arriving on Mooshika and defeating the proud demon. This episode reminds us that ‘ahamkar’ or ego is the root cause of self-destruction. 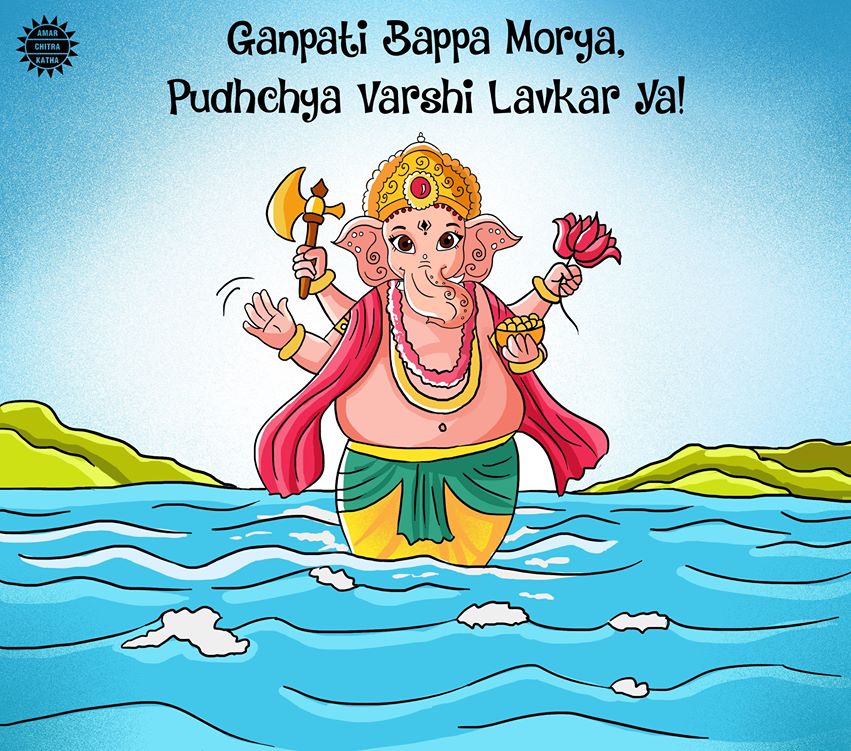 When we immerse Ganesha’s likeness in the sea at the end of Ganesh Chaturthi, we also immerse all our negative traits, be it pride, arrogance, desire, delusion, greed, anger, jealousy or self-love. Ganesha's potbelly is large enough to take away all our flaws and sufferings. May he grant us strength and fill our lives with happiness and love.