Vali and Sugriva were the progenies of Lord Indra and Lord Surya. They were the children of Riksharaja, a monkey born from Lord Brahma’s tilaka, who was instructed to roam the forests and kill demons. One day, Riksharaja entered an enchanted pond and was transformed into a beautiful lady, attracting the attention of both Lord Indra and Lord Surya. Soon after, they each sired Vali and Sugriva respectively. The two powerful brothers were asked by Lord Brahma to live in the Kishkindha mountains.

The Curse of Sage Matanga

A demon called Dundubhi had been terrorising the gods of the seas and the mountains. After vanquishing them, he started looking for someone who would match him in strength and valour. The god of the mountains told him about Vali, the monkey king of Kishkindha, who was not only a powerful ruler but also a skilled warrior in his own right. And so the demon sent out a challenge to Vali, with a fierce battle following. This battle resulted in the death of the demon, and his blood flowed freely, including through the hermitage of the sage Matanga at Mount Rishyamuka. The sage was very angry when he saw that the demon’s blood had destroyed the trees he had tenderly nurtured, and through his divine powers, he saw that Vali was the one responsible. Filled with rage, he cursed the monkey king that if he ever set foot on Mount  Rishyamuka, he would die. This led to Vali being permanently exiled from Mount Rishyamuka.

Meanwhile, Mayavi, the son of Dundubhi, challenged Vali in a bid to avenge his father’s death. However, Mayavi was no match for Vali and his army, and sensing his impending defeat, he ran and hid in a cave. Vali and Sugriva followed him to the mouth of the cave, where Vali instructed Sugriva to wait for him outside. Sugriva waited for his brother's return for over a year. A year later, a stream of blood flowed out the cave and, hearing no sound of his brother, Sugriva assumed his brother was dead. With a heavy heart, he closed the entrance of the cave with a huge stone to prevent Mayavi from escaping and returned home. 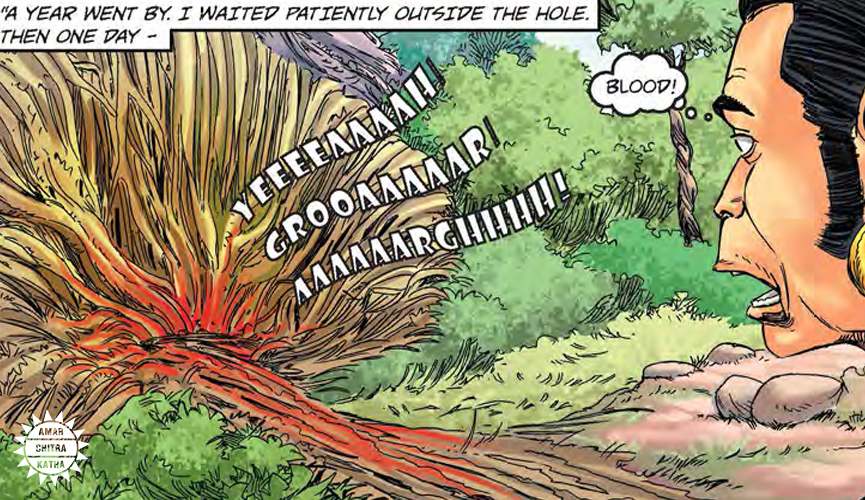 With his brother gone, the throne now lay vacant. After a lot of persuasion from his ministers, Sugriva hesitantly took over the kingdom. However, little did Sugriva know that the stream of blood that he saw earlier was actually Mayavi’s and not Vali’s. Vali was furious, seeing the rock blocking the entrance to the cave, and thought that his brother Sugriva had betrayed him. Vali managed to escape and made his way back to the kingdom, banishing Sugriva and enslaving his wife, Ruma.

Sugriva sought refuge in the mountains of Rishyamuka, where he knew Vali would never dare to step foot. One day, Hanuman, who had accompanied Sugriva, met Rama and Lakshmana, and brought the Ayodhya princes back to Sugriva. Hearing Sugriva’s plight, Lord Rama decides to help him win his kingdom back, in return of Sugriva’s aid in his quest for Sita. 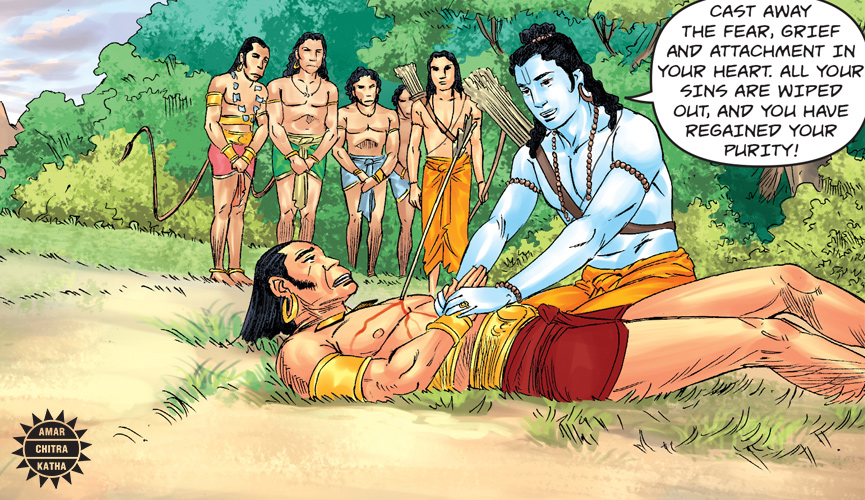 Sugriva knew there was no way he would be able to overpower his brother in a one-on-one confrontation. However, with Rama by his side, he felt more confident of his chances. Rama asked Sugriva to challenge Vali to a duel. However, during the fight, Rama was not able to differentiate between the two, leading to Sugriva’s defeat. Rama asked Sugriva to call for a rematch, to which Vali readily agreed. However this time, on Rama’s instructions, Sugriva wore a garland to the match. Now easily able to tell the two brothers apart, Rama shot an arrow at Vali mid-battle, piercing his heart and killing him. In his dying moments, Vali realised the sin he had committed and asked for Sugriva's forgiveness. He then entrusted his son, Angad and his wife, Tara, to Sugriva’s care, passing away peacefully. Thus, Sugriva once again became the king of Kishkindha, ruling with utmost sincerity, and in time, sending his army to help Rama take on Raavana.