according to India’s performing arts traditions, the navarasas are the nine emotions evoked in an audience during their experience of a dance, music or drama performance. The Natyashastra, a Sanskrit text on performing arts by Bharata Muni, mentions only eight - Shringara, Hasya, Karuna, Raudra, Veera, Beebhatsa, Bhayanaka and Adbhuta. The ninth rasa, Shanta, was later taken from the Abhinaya Darpana by Nandikeshwara. 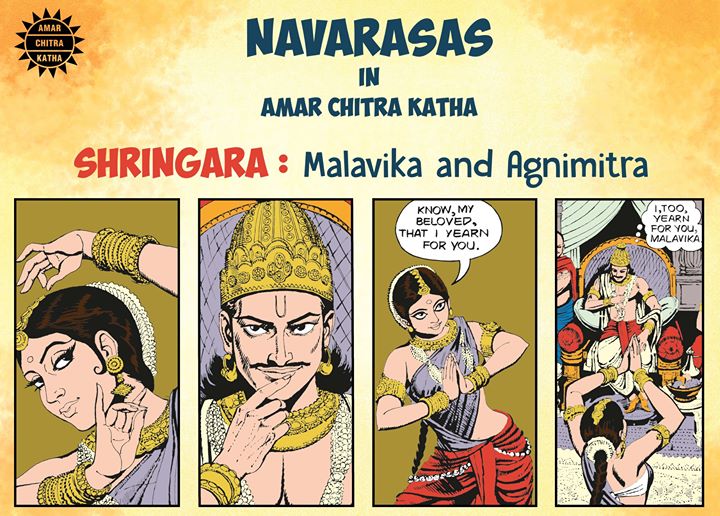 Malavika, the princess of Vidarbha, had won the heart of King Agnimitra, disguised as the queen’s maid in his kingdom. During a dance performance in the court, Malavika reciprocates his feelings through her performance, a performance that very clearly vocalises her romantic intentions to the reader as well. 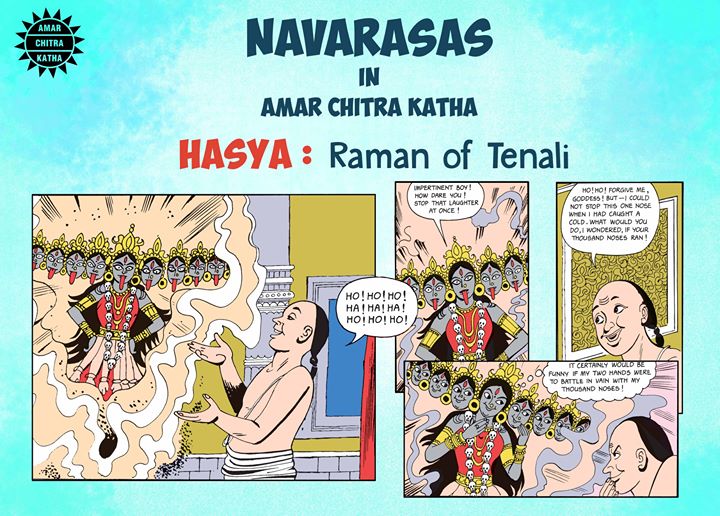 Raman of Tenali used to be quite the lazy young man. Once, when a sadhu told him to find some work, he lied saying that his ill health forbid him from working. The sadhu then taught him a mantra to invoke Kali and seek her blessings. Raman reached the temple and began to pray. When the goddess appeared before him, she was amused by his witty charm and granted him the title ‘Vikatakavi’, a palindrome in Telugu for ‘clown-jester-poet’. Tenali's exploits are the very definition of hasya. 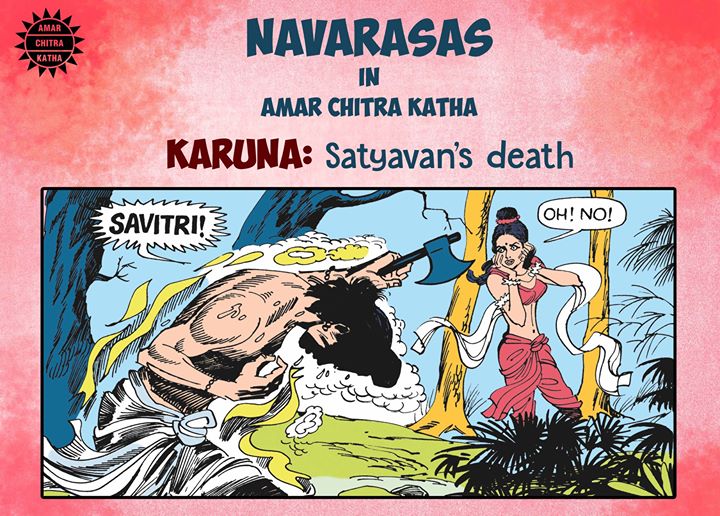 Princess Savitri married Satyavan who was destined to die within a year of their marriage. On a fateful day, when they were in the woods collecting firewood, a sharp pain pierced through Satyavan’s limbs and he fell down unconscious, invoking in the reader a sense of compassion for the now-widowed Savitri.

Babasaheb Ambedkar was born in a Mahar family, a caste that was treated as untouchable. When he joined school, he was treated differently from his peers who belonged to the upper castes. He was made to sit on the floor, while his classmates sat on benches. He was also not allowed to touch the pot of water that was kept for the students, instead was forced to sip it from his hands as the teacher poured the water out for him. All of this deeply hurt young Ambedkar and angered him, and angers the audience in turn. 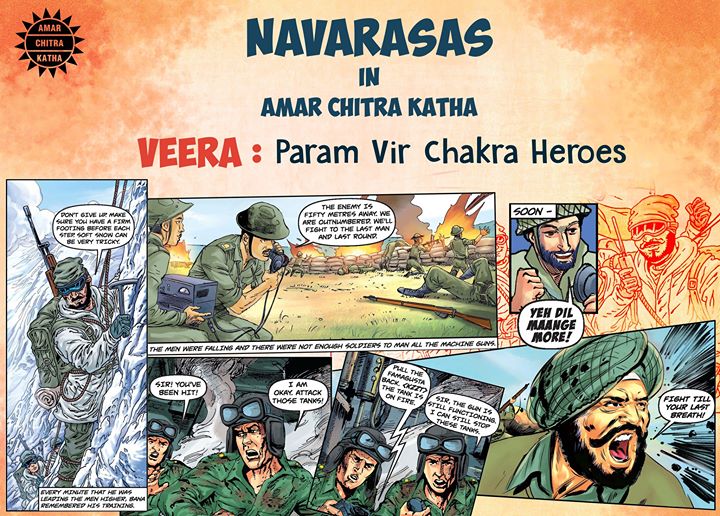 The Param Vir Chakra is the highest military honour given to the soldiers of the Indian Armed Forces. This medal has been awarded to 21 officers for their unwavering courage and spirit of sacrifice even in the face of great adversity. All the stories in this collection inspire the audience with the absolute bravery on display by these real-life heroes. 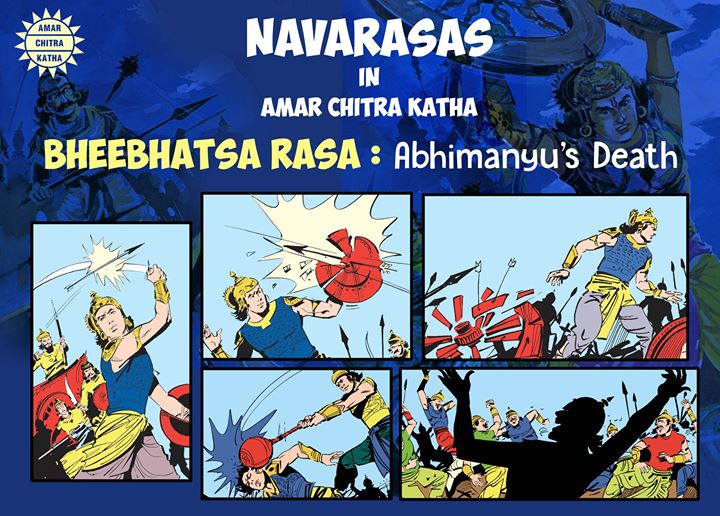 When 16-year-old Abhimanyu was trapped alone inside the chakravyuh, a circular battle formation, he was attacked from all sides. With his weapons broken and him rendered unconscious, he was finally killed with the blow of a mace. The Kaurava army rejoiced as the young boy lay dead. The entire incident fills the reader with a deep sense of sorrow for the boy and utter disgust at the Kauravas and their callous behaviour and ruthlessness. 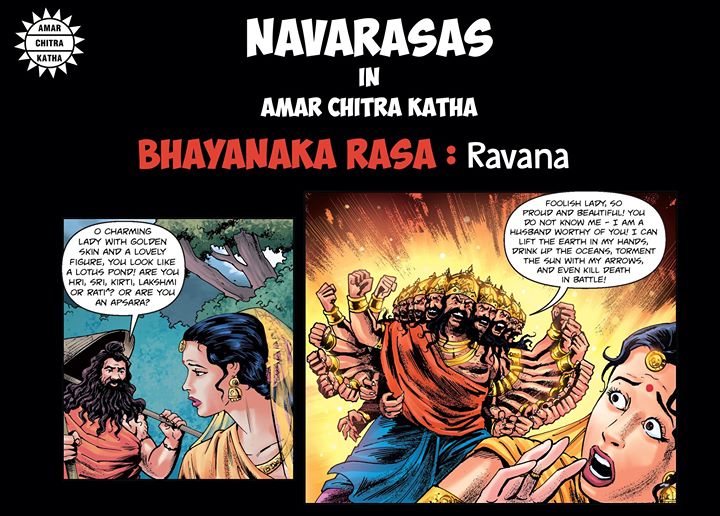 When Ravana came to abduct Sita, he shed his disguise as a brahmin and showed himself in his true form as the fearful ten-headed demon king, filling both Sita and the reader with horror! 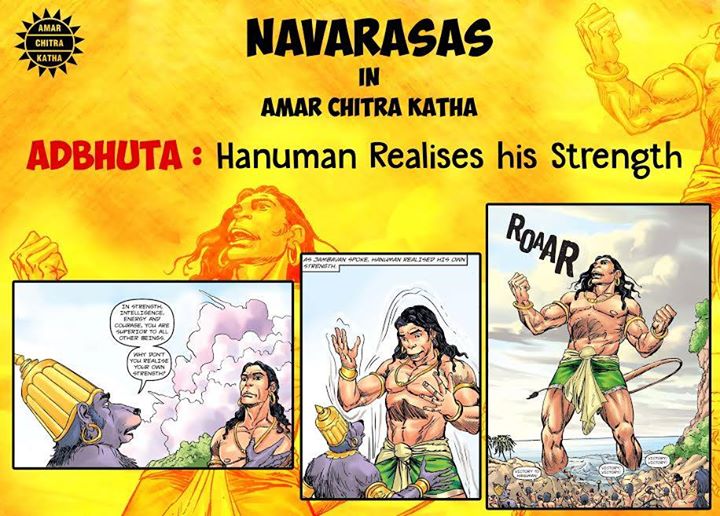 When Angada’s forces reached the vast ocean in their search for Sita, they were faced with a dilemma - who would be able to leap across the waters and reach Lanka? It was then that the wise bear king, Jambavan, reminded Hanuman that he was blessed with many divine boons. As Hanuman increased his physicality to gigantic proportions, it's not just his fellow soldiers who are filled with wonder at their comrade's size, but also the reader. 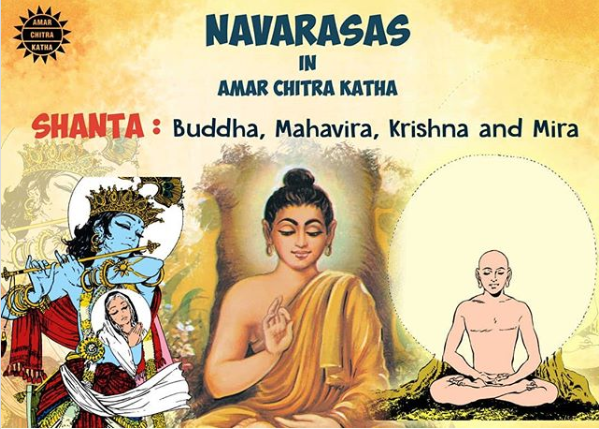 We have chosen three images from our comics that inspire this rasa in anyone reading their stories. There is Mirabai safe in Krishna’s heart after she departs from the mortal plane, Buddha at peace with himself and the universe after attaining nirvana, and Mahavira in deep meditation, oblivious to the world with all its noise and confusion.